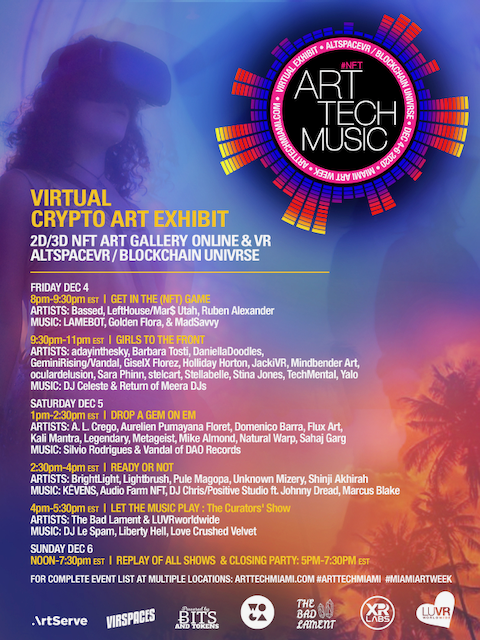 FREE EVENT – OPEN TO THE PUBLIC

Bringing together some of the top crypto artists from around the world, this mixed media event taking place over 3-days in Virtual Reality(VR) highlights the intersection of music and art, capturing the excitement of NFTs (Non Fungible Token) and XR (Extended Reality). With a curated selection of NFT artwork and music, the exhibition will feature still images, video, audio and 3D models from a diverse range of innovative artists.

Join us for an immersive, interactive display and learn more about tokenising art on the blockchain or becoming a collector, bid on the artist’s work or just drop by to meet some like-minded people in the virtual space!

With DJ sets from international acts and Miami artists, it’s a collaborative synergy that’s come to be expected from the Miami art scene, through an online accessible way for the global community to participate. Experience a curated mix of sights and sounds with a global influenced Miami vibe, a show for artists by artists.

Art Basel has been a beacon for the Miami Art Scene since 2002. Since its onset, Miami and the Beaches have embraced the energy of the global art community. Numerous satellite shows, festivals, performances, gallery events and street art have exponentially spawned from this yearly convention in true Miami magical form.

Due to the pandemic, it is the first time that the official Art Basel Convention will not occur. In the spirit of Art Basel, Miami locals are not letting this stop the flow of artist expression this year.

This NFT exhibit in AltspaceVR is a component of a series of events organized by the XR-LABS Miami Community, and we are inviting the world to join us!

If you are wondering what is Cryptoart or NFT:
Why Should I Buy #CryptoArt?

FEATURED ARTISTS (With Links to those with CryptoArtNet Artist Profiles)

A.L Crego walks comfortably in the midpoint between the stillness of the picture and the continuous but condemned to an end frames of the film.

Featured Art:
Between Bars – That feeling that appears when you understand the meaning of the lyrics of a song that you have heard and sung a thousand times, but you never realized about it.

adayinthesky is a photographer, writer and artist from Vancouver, Canada, and half of Guerrilla Music.

Featured Art:
Dance – This piece is about the feeling of music and movement.

I created this piece after deep shamanic healing. I discovered that Fear is an illusion and it can be transformed into Power that unleash our true potential

After losing twice all my analogic production I turned digital, found crypto and continued to experiment here.

Featured Art:
Breathing Good Words Around – Resonant Rhythm -The works submitted talk about how sounds and music permeate and resonate inside of our innerworld.

I am a Mixed Media Artist from England who enjoys experimenting with various mediums to create pieces to provoke thought and prompt the observer to look and explore.

Featured Art:
Buju – I have always loved reggae and I wanted to pay homage to an artist that reminds me of my youth.

I am a 21 year old South African cryptoartist, fan artist and bookworm.

Featured Art:
Based on Lady Gaga and her development as a musician. Inspired by playing cards.

Glitch is the event. Pixel is the element. Low resolution. High vision. Experimenting. Exploring. Exhibiting. Exposing. Expanding. When you see a glitch, think of me.

Featured Art:
Les Danseurs au Glitch – I remember those wild times, the groove flowing under our skin, the lights blinding our eyes, the dance floor opening under our feet. Close to eachother, the night embracing the crowd in a hug. Let’s dance. I want to party all night long!

Flux Art, aka Clyde F. Smith, is new to the cryptoart scene but has a lifetime of involvement in dance, performance and visual arts.

Featured Art:
Staircase Session for Art Tech Music is a 1/1 edition of a video still by Neal Hutcheson, altered by machine learning, of trombonist Jeb Bishop and dancer Clyde Smith.

The soul of this artist is gifted with a natural sense of curiosity and innovation, making the best use of whatever is available to create.

Featured Art:
FLOE – An audio visual collaboration between mother and son, capturing the dance through life in the waters that surround all of us.

Holliday is a multi-dimensional artist and animator who creates original works of art in virtual reality that mimics various levels of consciousness to influence viewers to experience an altered state of immersion.

Featured Art:
Tap Dancing is a piece exploring movement and sound with animation and special effects.

My art is a form of therapy and offering in prayer. I meditate with nature and the goddess energy of Ma Kali before and during my artistic process.

Shiva Slide: Lord shiva has been having some fun recently, the gods are dancing while we feel the thumping as pain. The pain is just a short ride, we will make it.

LAMEBOT is a Miami based artist that utilizes his mercurial music production to fuel his unique aesthetic.

Featured Art:
“Minerva Leaving” – The Goddess has apparently left this world to fend for itself.

Laurence Gartel is known as the Father of Digital Art for over 45 years.

Mar$ Utah is a Rock and HipHop vocalist and NFT artist.

Legendary is an Austrian artist mainly focusing on satisfying and story-driven 3D loops.

Featured Art:
“Transparency of Time” is inspired by the Heisenberg uncertainty principle, and answers the question what hides inside the pendulum. The color scheme and the magenta hues pay homage to redshift and blueshift describing the phenomenon of light shifting towards either shorter or longer wave lengths depending on whether objects in space move closer or farther away from us.

Lightbrush is a guerilla projection mapping artist and 3D animator who has been utilizing his tech and artistic skills to support protests around the country, and has recently entered the cryptoart space.

Featured Art:
Alissa shares a selection of 3D elements from the VR 360 music video for Love Crushed Velvet collab with The Bad Lament, along with a 3D renaissance of her Music Chroma lightbox series for the Marlin Hotel South Beach Collection.

Featured Art:
Dream Box – Exploration into the multidimensional states of our imagination. Collab with LUVRworldwide expanding his signature Tapenology style into a 3D experience.

I am a digital artist who has found his place selling VR sculptures to collectors around the world thanks to the exciting new world of crypto art.

Featured Art:
The Priestess and the Chrysalis – Here a Silc priestess sings in harmony with the hum of a chrysalis. This piece was directly inspired by talking to a small girl about how girls would be better at riding butterflies than boys would.

An artist and programmer with a love of digital decay, abstract forms, and technological misuse; Mike creates works to please his own aesthetic (and often poetic) sense, using a continually evolving suite of image generation and manipulation tools.

Brooke Einbender is a leading pioneer in the exploration of XR art & community-based VR collaboration. She’s establishing new frontiers and directions at the intersection of where art and technology meet in the context of its impact on human consciousness.

Featured Art:
Breath Out – Tiltbrush painting/AR – This meditative piece invites you to embrace its fiery energy and let all the other B.S. float away like the sounds of music.

Featured Art:
Metaverse Meditation – “a Breakthrough beyond Time … a Crystalline Meditation Time Vortex experience captured on film for the very first time ever …”

Featured Art:
Seeds of Space (2020, Tilt Brush) I wanted to be as far from Earth as possible, immersed somewhere not only with no walls, but with no beginning and no end. Title & concept inspired by the song, Seeds of Space, from In the Village of the Apple Sun (2006), by Anton Barbeau.

I love to create anything surrealist or ancestral.

Ruben Alexander is a US based digital artist that loves to experiment and mix tools and mediums to share.

Featured Art:
“The death of rock n roll” speaks to this time where social gathering is *verboten* and the ways we have listened to music have been further digitized.

Featured Art:
“tethered” is an artwork emerging along the lines of companionship in a digital world, the word tether stands for connecting digital devices and also being confined in a space, the aspect which has more so over has been brought to light due to the pandemic. Reflecting towards a dithered global companionship while also reflecting on some time to self retrospect, being a companion of oneself and dance with your own shadows in this box.

Featured Art:
Bjork is an incredible artist and musician pioneering the interface of VR and music videos, her work has been a lifelong inspiration to me and I wanted to honor her with this tribute portrait of her from her album cover for Homogenic.

Featured Art:
And On: Inspired by the enigmatic and always dynamic Erykah Badu.

Featured Art:
Mariah Antoinette – A hybrid of Mariah Carey, song bird with an infamous 5-octave range, and Marie Curie, who was said to occasionally keep birds in her hair.

Featured Art:
Idea Machine – Within you exists an Idea Machine. This Idea Machine runs 24/7. It produces ideas when you are both awake and asleep. It’s always there. It’s running constantly, whether you are aware of it or not.

Stina Jones is an independent artist, best known for her quirky character designs which incorporate her trademark use of clean lines and bright, happy colours.

Featured Art:
Songbirds of electronic dance music; a page from my digital sketchbook.

I reproduce reflections of my imaginary topography inspired by society, whilst against the grain of the mundane.

Michelle Brown is an Australian new media and VR artist focused on immersive and interactive art installations and creating storytelling experiences in the extended reality space.

Featured Art:
A co-curator of this event, Michelle Brown displays virtual 3D elements from her VR music videos along with a video teaser for leaving richmond.

“We first came to know Toronto’s Unknown Mizery several years ago as a highly outspoken songwriter and recording artist, and since then he’s expanded his overall repertoire immensely.

As a man of many hats, the Guerilla Music emcee is a certified producer, beat maker, radio show producer, entrepreneur, film maker, activist, humanitarian, community builder and even more that…” – HiphopCanada.com

Featured Art:
The song Forever is about finding abundance in the moment with lyrics touch on the good feeling that hip hop culture has, this feeling will live forever. Gamja Beats / ‘Cassidy’ / Italian rapper “Moicano MC”.

Featured Art:
“Mindful Divers” – A couple of aliens from another reality with their pet. They communicate in a language that we don’t know. What are they talking about?

Get Your CryptoArtNet Listing by Starting Here!