Two particularly promising cryptoart platforms recently launched, NFT Showroom and Cargo. Of the two, I’m most excited by NFT Showroom. It’s on the Hive blockchain and you can find a listing of team members in their launch announcement post. Some great artists are involved and the platform has the feel of one emerging from the cryptoart community.

I follow a bunch of cryptoartists via Twitter and lately I’ve been discovering many with which I was unfamiliar via NFT Showroom’s Twitter account. It’s awesome to see such an excellent project using Hive and being led by artists. You can find out more through their Peakd feed and through the Ultimate Guide To NFT Showroom.

If NFT Showroom hadn’t launched I’d probably be most excited by Cargo. The Cargo Marketplace is an Ethereum-based NFT minting and sales platform. Lots of well-known cryptoartists are minting there and the site showcases their work quite nicely.

I did a bit of minting when the site was still in test mode and I need to follow up to see how things have changed. My general impression was that Cargo is a well thought-out project that has done a good job of learning from other platforms. One of their more interesting features is the ability to mint ERC-1155 tokens which offers one possible route to reducing your gas costs. Cargo also recently introduced NFT staking.

i4 Art is another promising artist-led project that describes itself as a “member owned artist network exploring opportunities in blockchain based digital art.” It’s organized as a DAO and here’s what they say they do:

“We buy digital art, and sell for more later. We also buy art for groups and individuals.”

“We onboard new artists to blockchain, and purchase NFT minting rights from artists not interested in dealing with crypto.”

“We educate and mentor artists, to maximize their potential.”

The founding members are listed on the bottom of the home page and they include some of the most respected cryptoartists in the game.

Here’s more on how the DAO works, their art collection displayed on OpenSea, their Discord channel and their Twitter account.

Probably the most slept on news in cryptoart at the moment but it’s not like they’re heavily promoting it either. On the other hand, sometimes slow and steady is the smart path to take. 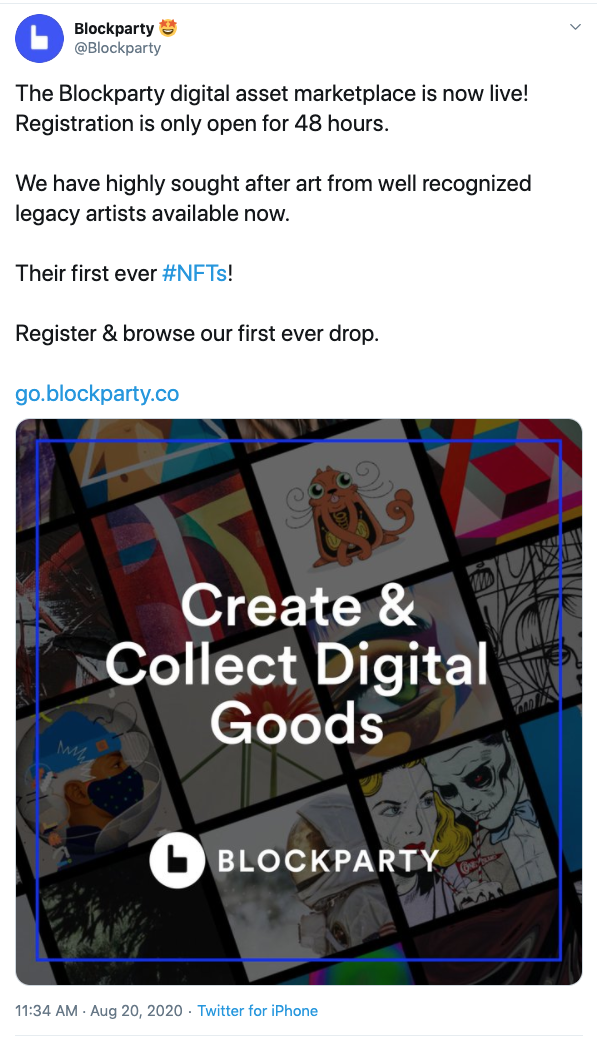 Blockparty is a new gallery/marketplace featuring curated artists. They’ve launched their marketplace with a small group but are also taking applications for new artists.

They recently opened registration for collectors, I think, for 48 hours. I guess that’s a FOMO tactic?

You can join over 16k followers (!) on Twitter to keep up with their progress. 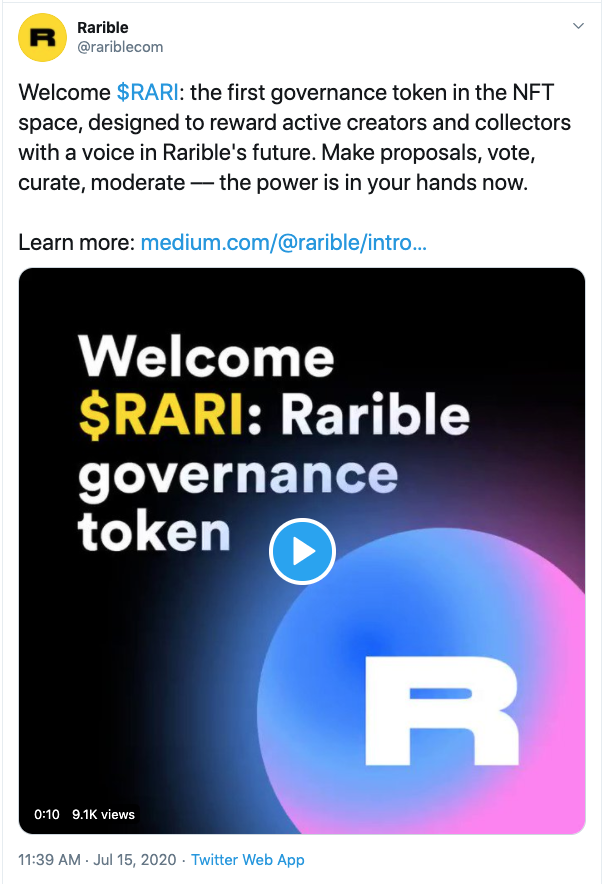 $RARI is a new Ethereum-based token from the popular cryptoart platform Rarible which has gotten more attention than all of the above combined. Launched as a governance token, $RARI has been generously distributed to all those buying and selling art on Rarible. What’s crazy is that some $RARI will also be distributed to NFT holders who purchased work on competing platforms.

Rarible has also announced plans to become a Decentralized Autonomous Organization or DAO. This is a bold move that will put a very community-oriented platform into the hands of the community. Given that many of Rarible’s challenges stem from being an extremely open platform it will be interesting to see what the community does with itself!

There’s a lot to keep up with in the land of cryptoart and one way I’m trying to make that easier is with CryptoArtNet’s CryptoArt Web Directory. It’s a very simple link-based directory that I will update on an ongoing basis.