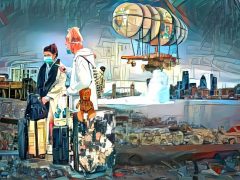 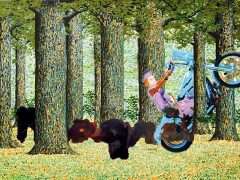 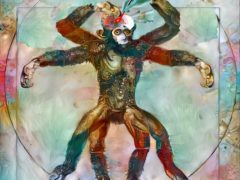 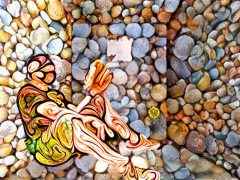 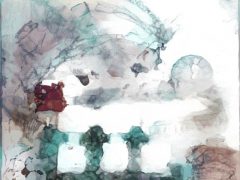 I’m not a visual artist by sensibility or training. My academic and professional background is in literature and philosophy. Words are my homeland, but pictures are a nice place to visit. My interest in cryptoart began with the idea that playing around with pictures might be a nice amuse bouche between literary courses but then I found in digital art a creative immediacy that rhymed with the way I think and the way I like to work: that is, like a lyric poet: brief, intense episodes of concentration where I’m engaged by an idea that I can’t be free of until I crystallize it into something enduring; until I have successfully taken it out of my head and put it into the world to walk by itself. I really value that thing called a flow state, where hours fly by because you’re totally engaged with something: the aesthetic as the opposite of the anaesthetic. Plus I like the dopamine hit of making things!

I have no formal training and although I flatter myself that I can draw a little, that’s a very raw ability that I intend to refine. For that reason, and because in everything I do creatively I’m allusive and intertextual and aware of the tradition, my method tends towards bricolage. Originality as an admirable quality in art is quite a new idea: the birth of the Modern Era was also the Renaissance, a rebirth of the ancient. Shakespeare’s Henry IVth spoke about committing the “oldest sins the newest kinds of ways” and I suppose that’s as good a description of what I do as any. Either that, or some darker postmodern view like building from the ruins. Or perhaps I’ve just got a sticky beak!

In practical terms, I start with an image: either something I’ve found in the public domain or a photograph that I took or that was given to me. The pictures that engaged me at first were all views of London, which is one of the reasons I’m called Unrealcity. I add to these base images and alter them using AI augmentation and animation, making the familiar unfamiliar. I also use Artbreeder to cross two images and edit the “genes” of the resulting offspring, glitching techniques, double exposure tricks and image manipulation apps of various kinds.

The poet Archibald MacLeish said, “A poem shouldn’t mean / But be”. There is always an idea, a feeling, a perspective that informs my pictures but I think if they have meaning, it’s in them, not behind them. I do look for my artworks rather than find them, and I want other people to find things in them. If I had an idea I could just tell you about, I would have written an essay rather than made an artwork.