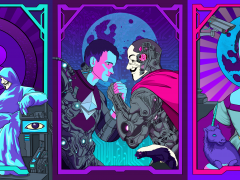 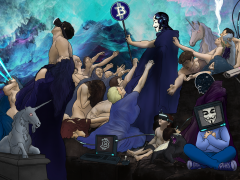 PR1MAL CYPHER studied philosophy, linguistics, psychoanalysis and art in Innsbruck and Vienna. In the past his artistic work was mainly in the field of oil painting. At the beginning of 2020 he reinvented himself and forced himself in his work mainly into the digital field and especially into the cryptoart and NFT scene, in which he quickly flourished and gained a wider recognition. PR1MAL CYPHER was born.

His work is largely inspired by the Vaporwave and Outrun art, as his passion has been CYBERPUNK since his early youth. He sees in it not only a graceful aesthetic. Cyberpunk is much more – a bridge of the present and its technical innovations and ambitions to different scenarios of the future of mankind, which will be significantly influenced by technology. He sees cyberpunk as a melting pot for various socially relevant topics. Cyberpunk — it is political, rebellious and socially critical. The reference to the Cypherpunk, Anonymous and also Blockchain movement is thus clearly reflected in his works and is of crucial importance.