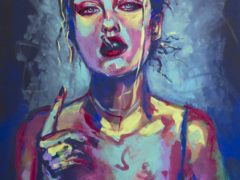 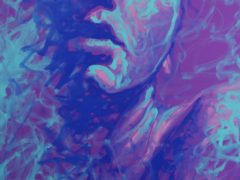 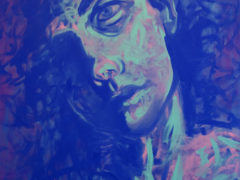 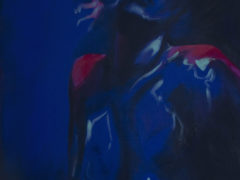 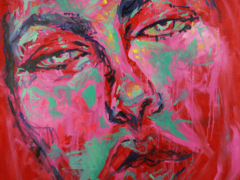 From color to composition, Kelsey Grina’s artwork is a tribute to cultural contradictions and the rebellious female.

Grina was born and raised in Kuwait, a country molded by sexual censorship, conservative gender roles, dusty streets and sweltering heat. After 16 years spellbound by Kuwait’s cultural tunnel vision, Grina moved to Italy. Here, she was exposed to a profound historical and contemporary admiration for the female figure, romanticism and sensuality that directly contrasted Middle Eastern mentality. Roman mythology and astrology became a recurring inspiration for Grina, specifically Venus, the goddess of love, beauty, desire, sex, fertility, prosperity and victory, as well as Libra, the universal symbol of balance.

This mélange des cultures catalyzed her early interest in time and geography determining whether sexuality is praised or condemned. Her artwork and processes now act as a therapeutic exercise in untangling the contradictory world views she absorbed early on. Subsequently, women are often at the core of her work.

In pushing the boundaries of long-standing gender roles, Grina’s paintings are at an intersection of intrigue and strength, masculinity and femininity. She often highlights superficial imperfections, and the idea of beauty as a subjective perspective. This appears on her canvas through aversions to traditional beauty standards, choosing subtle cross-eyed gazes and women in unapologetic poses instead of delicate portrayals of mainstream perfection.

In another act against timidity, Grina thwarts neutrals. Rather, she communicates her introversion through an extroverted color palette. Rough, textured strokes of vibrant hues form her femme figures and portraits. She enjoys playing with the polarizing emotions behind each color, reveling in the ways lime green is obnoxious and toxic, but also represents fresh, sprouting grass. Tapping into these dualities, her paintings exude a complex and alluring aura.