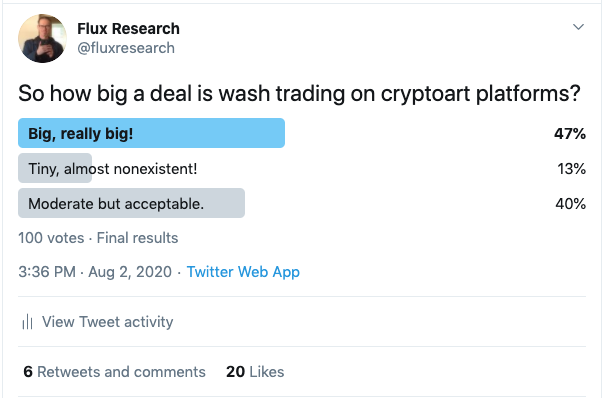 When you’re trying to figure out the potential long-term value of an artist’s work by considering various data points, you can as easily be led astray with cryptoart as with any other asset. Wash trading is a particular concern whether it’s done to directly manipulate prices or to create the appearance of widespread interest and hype. Does it bother artists? Probably not as much as collectors.

What is Wash Trading?

Wash trading has a long history particularly in the stock market. According to Investopedia:

Though cryptoart is not a security it is increasingly an asset in which individuals and organizations can invest. As the work of particular artists is identified as strong investments, prices will rise accordingly which can make a huge difference in an artist’s life. So wash trading can affect artists both short and long-term even when such activity seems remote and out of one’s hands.

In cryptoart wash trading is often used to create the appearance of high sales volume. Sales volume affects ranking on leaderboards which can be a really strong form of marketing to buyers looking for promising cryptoart investments and speculative opportunities. In addition, the space is getting noisier and it will be increasingly difficult to make a big splash so leaderboard ranking can help with that.

Some people also use the term wash trading to refer to buying one’s art back or through a third party to raise the price. This seems likely to attract more scrutiny if leading to newsworthy sales.

With the launch of Rarible’s cryptocurrency $RARI, which is distributed based on “participating on the platform… [aka] Marketplace Liquidity Mining,” an even more direct incentive for wash trading has emerged.

So cryptoart wash trading can create an appearance of higher interest for an artist’s work than actually exists in the marketplace, create increased visibility for an artist’s work, be used to directly manipulate pricing and lead to larger stashes of $RARI.

CryptoArt Twitter has a wide range of responses and I gathered some of those through a Twitter poll which received numerous responses in the comments. The poll results are posted above.

There was also a lively conversation that emerged based on a tweet from @SatsMoonSoon:

The response focused on artists listed as high volume sellers, artists who are seeking to raise prices and artists seeking $RARI. Some cryptoartists feel these practices don’t affect them. @Reviiser maintains wash trading is not an issue for artists but does affect speculators: 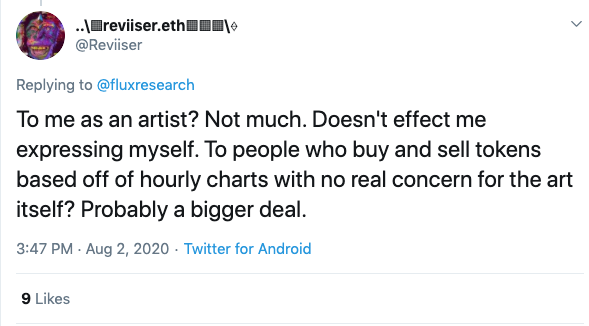 However, as @cechk_art pointed out:

Discussion of all these issues often indicated that the popular platform Rarible is considered to be an epicenter for wash trading. And one of its biggest critics has been NFT data firm NonFungible.

As the leading source of cryptoart and NFT sales data, NonFungible has high stakes in the game. At the beginning of the year, NonFungible included wash trading in a list of “Behaviors in the NFT ecosystem that we hope will decrease in 2020“:

“Most data and analytics platforms propose rankings of the top volume-generating projects. To make a place in these rankings, some projects do not hesitate to set up bots which exchange assets all day long to inflate their volume.”

“Tracking, data and analytical tools such as NonFungible have become, for some projects, a kind of free showcase, offering high visibility to projects generating high volumes. Some smaller projects have understood the importance of these platforms in the ecosystem and have believed that we would not notice these strategies.”

This article is well worth a closer look for those buying cryptoart with plans to sell it later at a higher price. Both investors and speculators should be aware of the tactics described that are not limited to wash trading.

All Eyes On Rarible

Though wash trading is unlikely to be limited to a single platform, Rarible has come under close scrutiny from both cryptoartists and NonFungible. The release of $RARI seems to have only increased such activity and Rarible is clearly aware of the situation: 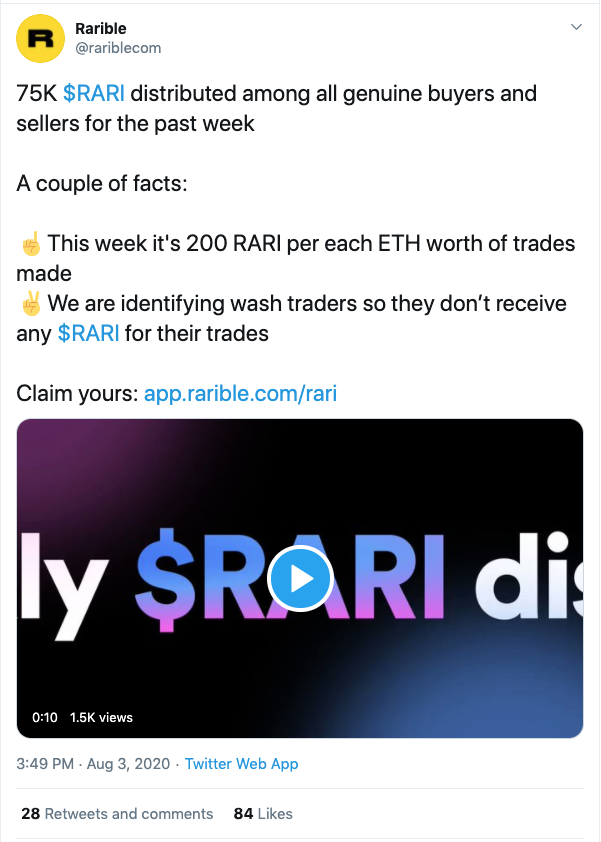 NonFungible recently called out Rarible and discontinued its visible data listing on the site: 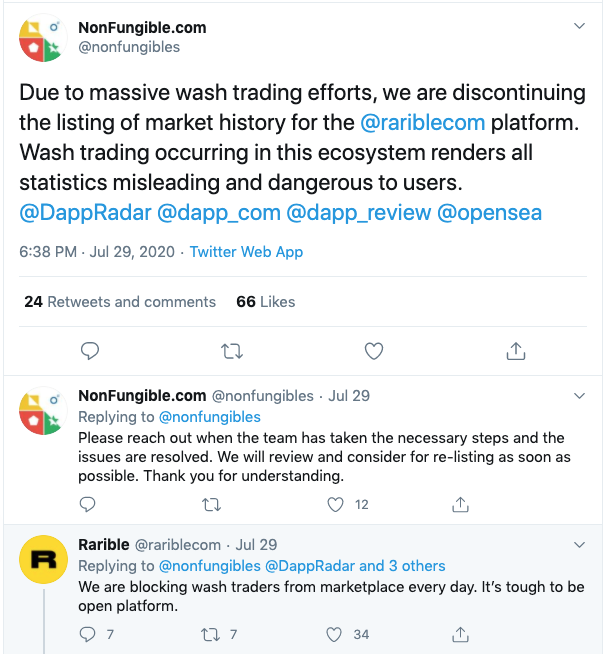 The comments in response to this exchange are well worth a look for more nuanced positions, for example: 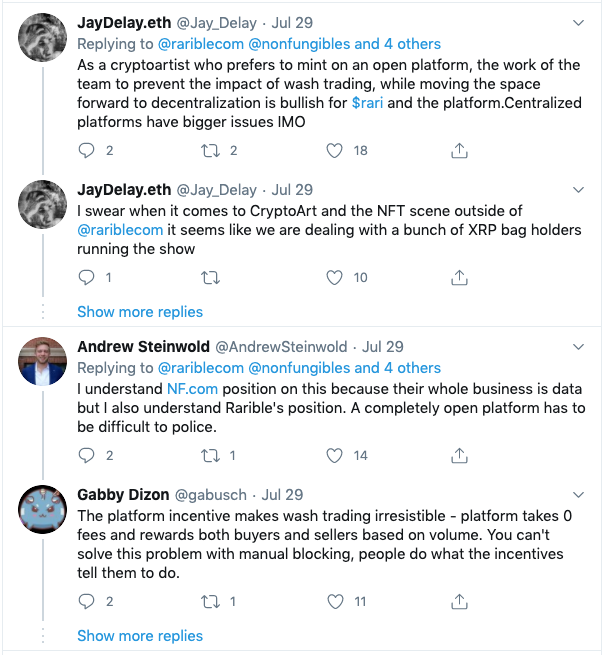 In turn, @xCryptochild called out NonFungible for lack of disclosure to which NonFungible responded:

And @Jay_Delay pointed out that NonFungible’s approach does not have to be all-or-nothing:

This issue goes beyond Rarible vs NonFungible but the positions taken related to both companies do highlight the range of concerns.

While current issues might be seen as simply growing pains for a new arts genre and asset class, these issues aren’t going away. Cryptoart’s grounding in non-fungible tokens and its history in relationship to cryptocurrency makes buying and selling an integral part of the art form itself.

Attempts to disconnect aesthetics from commerce are not only a historical fail but a failure to recognize the realities of the conditions under which cryptoart is produced and distributed.

More importantly for collectors with dreams of cashing in, tactics like wash trading are a reminder that the warm, fuzzy cryptoart scene has some sharp edges. Do your homework!